Over the past 15 years, Hesco Concertainer® have become the system of choice enabling it to be used across a wide variety of civil engineering applications. Typical applications include Land Reinforcement, Retaining Walls, Erosion Control, Ocean/Coastal Erosion, River and Canal Bank Stabilization.

Controlling the forces of nature can be daunting and, at times, impossible. HESCO Concertainer® units are an innovative way to protect property and lives threatened by the forces of water. Traditional methods for controlling flood water are now being replaced increasingly by Concertainer® products. 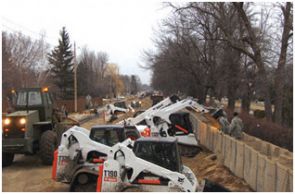 In the event of a flood warning, HESCO Concertainer®  units can be deployed quickly and easily to construct flood defenses without the need for specialist tradesmen or equipment – making it ideal for emergency response.

Whether the increase in water level is gradual or due to sudden surge, Concertainer®  units and Flood line units provide a comprehensive solution to a wide range of flood-defense requirements.